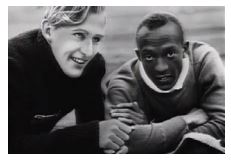 Many people feel that in this current atmosphere it is hard to make and maintain friendships. It seems that people are so busy, no one has any time for anyone else, even within Christian circles. Invitations to a home for a meal, visits to make new church members welcome, making friends for friendship’s sake, all seem to be things of the past. The modern attitude is: “I am so busy making money, taking care of family, household chores, and hobbies, what’s in it for me?”

Let me introduce you to a story about friendship that was born in the most inhospitable circumstance between two most unlikely people.

Jesse Owens, son of an Alabama sharecropper and grandson of slaves and Carl Ludwig “Luz” Long, an attorney in Leipzig, Germany, were both competing in the long jump preliminaries, hoping to qualify for the event in the afternoon of August 4, 1936, Olympic games in Berlin.

Jesse Owens won gold for the 100-meter dash. The following day he won gold again for long jump with a leap of 8.06 meter (26 ft. 5 in.), later crediting this achievement to the technical advice that he received from Luz Long, the German competitor whom he defeated. Jesse continued to win another gold medal with the 200-meter sprint and collected a fourth gold when the relay team won the 4 x 100-meter relay. He was competing in the most intimidating environment imaginable, where the racist ideology of the Nazi regime was building in intensity and where the instigator, Adolf Hitler, was a regular spectator in the stands of the Olympic stadium.

Luz was the German long jumper—tall, blue-eyed and blond—the personification of the Aryan ideal and Hitler’s opportunity to see the Nazi’s theory of racial superiority in action. Jesse had fouled in the qualifying round in the long jump and had one jump left, and sat dejected on the ground waiting for his final jump.

In view of the stadium of 100,000 capacity, Luz walked up to Jesse and introduced himself. Recognizing Jesse was having some trouble and should have been doing better, Luz advised Jesse to jump from a spot several inches behind the take-off board. Jesse took the leap and qualified. Hitler left the stadium.

When Jesse won the gold medal, Luz won the silver and was the first to congratulate his new friend. Jesse later recalled, “It took a lot of courage for him to befriend me in front of Hitler. … I would melt down all the medals and cups I have, and they wouldn’t be a plating on the twenty-four-karat friendship that I felt for Luz Long at that moment.”

Jesse and Luz corresponded after the 1936 Olympics. In his last letter, Luz asked Jesse to contact his son Kai and tell him about his father and “what times were like when we were not separated by war. I am saying, tell him how things can be between men on this earth.”

Luz served in the Wehrmacht during World War II. During the Allied invasion of Sicily, he was killed in action on July 14, 1943. After the war, Jesse revisited Germany to meet Kai Long and later was best man at Kai’s wedding.

Friends, would you have the courage, in the middle of the stadium for all to see, to reach out to the perceived enemy of the Aryan race? Think of it. This friendship was witnessed by 100,000 people!

I want this kind of courage. Let us reach out to people and make friends for Jesus.

Paul said, “Look not every man on his own thing, but every man also on the things of others.” Philippians 2:4, KJV

“Put on therefore, as the elect of God, holy and beloved, bowels of mercies, kindness, humbleness of mind, meekness, longsuffering; forbearing one another, and forgiving one another, if any man have a quarrel against any: even as Christ forgave you, so also do ye. And above all these things put on charity, which is the bond of perfectness.” Colossians 3:12–14, KJV

What a courageous friendship!