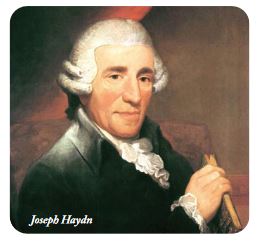 One time, about two hundred years ago, a little boy named Joseph lived in Austria with his father and mother. At this time, Joseph was six years old. One day, little Joseph saw the schoolmaster playing a violin, and he was thrilled with the sweet sounds.

“Oh, if I could only play like that!” he said to himself. “If only my father could buy me a violin!”

But Joseph’s father was too poor to think of such a thing. So our little six-year-old decided to make a violin for himself. His violin was just two sticks.

One day, when his mother was playing on her small harp and his father was singing, little Joseph trotted out with his violin. He held the larger stick as he had seen the schoolmaster hold his violin, and used the smaller stick for a bow. Then he made believe play, and with his sweet little voice he joined in the singing. After that, whenever his parents sang, little Joseph played on his wooden violin.

About this time, a man who had charge of a church choir made up of little boys heard Joseph sing. The child’s voice was so sweet and clear that this man wanted Joseph to come and live with him and sing in his choir with the other little boys.

But Joseph’s father thought it was a good chance for his son to learn to sing. So Joseph was taken away from home to live with the choirmaster.

The poor little fellow had a hard time without his mother to take care of him. He really had no one to love him. Often his clothes were dirty, and he did not have proper food. But the choirmaster did not care. All he wanted was Joseph’s sweet voice in his choir. But though Joseph had to work very hard for one his age, and though he was often punished, he never complained.

“I shall be grateful to that man as long as I live for keeping me so hard at work,” he afterwards said. Does this not show that he had a very sweet spirit?

When he was eight years old, another choirmaster took him for his choir. Here Joseph learned to play a real violin as well as some other instruments. Here also he began to write on paper the notes of music that were always floating through his head. No one helped him to do this. It seemed to be in him to write music. He studied the music which others had written, and by working very hard he managed to make progress.

When he was sixteen, his voice gave out. Then the choirmaster did not want him any longer, and the boy was turned out in a large city to look after himself. Poor Joseph had a hard time. It almost seemed as if he would starve. Still he kept at his music.

Finally, a noble prince in Austria took him to his castle to be the director of his musicians. The prince lived miles away from any city. Here in the quiet and beauty of the country, Joseph found a happy home. He loved the prince, and the prince was very fond of him. Every day, this young musician had to write a new piece of music for the orchestra to play before the prince. With Joseph, this was a labor of love. It was because of this daily work that he gained such skill in writing music. And it was because of this skill that Francis Joseph Haydn is called “The Father of Instrumental Music.”

Francis Joseph Haydn lived with the prince for thirty years. Then the beloved prince died. Joseph Haydn was now a great man. From France and England and other countries, he received invitations. Everywhere he went he was given the greatest attention, and his music won him many new friends.

Joseph Haydn’s greatest piece of music is that famous oratorio called “Creation.” It was written when he was an old man, sixty-five years of age. When he was writing it, it was his custom to kneel before God every day and pray for divine help.

“At the thought of God my heart leaped for joy, and I could not help the music doing the same,” he said, when asked how his music was so cheerful.

“Creation” begins with many harsh tones that represent the time when the earth was without form and void, and everything was in chaos. Then, from those discordant tones comes one grand strain of beautiful harmony with the words, “Let there be light!”

“The music came from above,” said Haydn, pointing upward.

It is a noble thing to give to the world such wonderful music, for as long as time lasts, it will help to make people better.