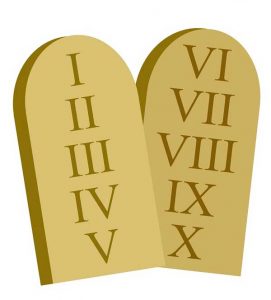 Introduction: In our last lesson we saw that we will be judged according to God’s law. Keeping the law does not save us, but it shows whether we have been born again. In Revelation, the keeping of God’s law is also what distinguishes God’s people from those who follow the Beast. In this lesson we will learn why.

2. We will study about the Beast in our next lesson. There we will learn that most of the world will receive his mark of authority. These people who receive the mark of the Beast (unknowingly, of course,) will actually think they are saved through faith in Jesus and will be astounded to find, too late, that they are lost! How did Jesus describe these professed Christians in the last days who follow the “lawless” Beast power? Matt. 7:21-23 [Ans: Like the Beast, they “practice lawlessness” (NKJV) Rev. 22:14]

4. What commandment in God’s law do most Christians disregard? Ex. 20:8-11 [Note: By looking at the calendar we find that the seventh day of the week is Saturday, not Sunday! According to the Ten Commandments, “the seventh day [not the first day] is the Sabbath of the Lord [not of the Jews].” The Jews kept this day simply because, until they rejected Jesus, they were God’s people. Our Further-study verse also makes it clear that the Sabbath is for Gentiles who are God’s people. Is. 56:1-8]

8. When did Jesus make the Sabbath? Gen. 2:1-3 [Note: Our Further-study verses show that God’s people kept the Sabbath before Sinai; and there is still, after Jesus’ death on the cross, a Sabbath rest to be kept. It was not just for the Jews and it has not passed away. There were, however, old-covenant yearly, ceremonial sabbaths (such as the Passover) which were given at Sinai and which, as “shadows of things to come,” pointed forward to Christ and were fulfilled and done away with at the cross. Ex. 16:21-30; Matt. 24:20; Col. 2:16, 17 cf. Lev. 23:23-44]

11. Was this Paul’s custom? Acts 17:2 [Note: Paul was accused of many things by the Jews, but one thing he was never accused of was Sabbath breaking! The Bible contains a record of only one meeting that Paul held on the first day, and that was a farewell service that continued until after midnight. Also, Paul told the Corinthians to gather up their poor fund on the first day of the week. This was a weekday activity. Acts 20:7-11 (In this passage, the New English Bible says “Saturday night,” instead of “the first day of the week.”); 1 Cor. 16: 1, 2]

12. On what day did John, the last apostle, have a vision while in exile? Rev. 1:10 [Note: The only “Lord’s Day” throughout Scripture is the Seventh-day Sabbath. Luke 23:56 (In this verse the followers of Jesus continued to recognize the binding claims of the fourth commandment after Jesus’ death on the cross. And Luke, writing decades after the crucifixion, continues to call the seventh day “the Sabbath.”)]

Commitment: The Sabbath is the one commandment we must accept solely by faith in Jesus’ authority. Keeping it does not save us, but it demonstrates our true allegiance. Today, during the judgment, God is again bringing His people back to full obedience. Though we are not held accountable until we have an opportunity to know the truth (James 4:17), out of love for us God is again teaching us these forgotten principles, that we may not inadvertently become followers of the “lawless” Beast. Is it your desire to follow Jesus all the way? Will you show your allegiance and love to Jesus by keeping His day of worship?