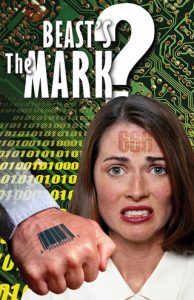 Introduction: The Bible tells of a mark, or sign, that will identify the Beast and his followers. By receiving this mark one gives allegiance to the Beast, and acknowledges His authority to be greater than God’s! In this lesson we will identify that mark.

4. Anciently a name represented one’s character. God wants to write His name-or character-in us. God’s character is described in His law. Where will God’s character, or law, be written? Will this writing be visible to mankind? Heb. 10:16 [Note: In prophecy the forehead symbolizes thoughts, and the hand symbolizes actions. Jer. 31:33; Heb. 8:10]

5. Which one of God’s laws especially identifies God’s people, marking them as those who accept His authority? Eze. 20:12, 20 [Note: The fourth commandment is God’s “seal.” It contains His NAME, TITLE, and DOMAIN-the elements of an official seal. Ex. 20:8-11]

7. What will the Beast boast that he can do to God’s law? Dan. 7:25 [Note: The Pope claims preeminence over God, for he says he can change His laws! (See Lesson 15.) Only one of greater authority can change another’s law. The Catholic Church repeatedly claims the responsibility for changing the Sabbath commandment as proof of its authority. “The day mentioned in the Bible is not the Sunday . . . but the Saturday It was the Apostolic Church which changed the changed to the Sunday.” “Isn’t it curious that non-Catholics . . . observe Sunday . . .[which] rests upon the authority of the Catholic Church and not upon an explicit text in the Bible? That observance remains as a reminder of the Mother Church.”-John O’Brien of Notre Dame in The Faith of Millions, 1974, pp. 136-137, 400, 401. Rom. 6:16]

13. While God’s followers symbolically receive God’s name in their foreheads, the Beast’s followers receive the Beast’s name (his character of lawlessness), signified by a number. What is the number of the Beast? Rev. 13:18 [Note: This is the number of a “man.” The Douay Bible notes that “The numeral letters of his name shall make up this number.” In ancient Rome, numbers were letters of the alphabet-called Roman numerals. As such, every name had a numerical value. The Pope’s official title is: VICARIUS FILII DEI- “Vicar of the Son of God” (Our Sunday Visitor, April 18, 1915). The numerical value of this name is 666. This is one explanation that fits the prophecy and, when compared with all other prophecies, helps to identify the Beast power. People will receive the Beast’s name in their right hand when Sunday laws become enforced and they yield obedience, and they will receive it in their foreheads when his character of lawlessness is written in their minds. Rev. 15:2]

Commitment: God says that the Sabbath marks His people as His, and that the Beast would make war on them. The Beast is that “lawless” one who would try to “change” God’s law, specifically the command involving “times”- i. e., the Sabbath. Thus, when Sunday keeping is enforced by law it will constitute the mark of the Beast. “You are that one’s slaves whom you obey” (Rom. 6:16). Today God is calling us to receive His mark (or seal). As you look upon your crucified Savior, will you acknowledge His authority by obeying Him and keeping His Sabbath?