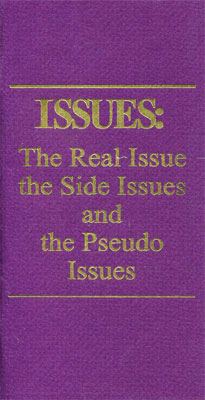 ISSUES: The Real Issue, the Side Issues, and the Pseudo Issues

Many will stand in our pulpits with the torch of false prophecy in their hands, kindled from the hellish torch of Satan. – Testimonies to Ministers 409

It is natural for the wrongdoer to hold the messengers of God responsible for the calamities that come as the sure result of a departure from the way of righteousness. Those who place themselves in Satan’s power are unable to see things as God sees them. When the mirror of truth is held up before them, they become indignant at the thought of receiving reproof. Blinded by sin, they refuse to repent; they feel that God’s servants have turned against them and are worthy of severest censure.

Standing in conscious innocence before Ahab, Elijah makes no attempt to excuse himself or to flatter the king . . . . He has no apology to offer. Indignant, and jealous for the honor of God, he casts back the imputation of Ahab, fearlessly declaring to the king that it is his sins, and the sins of his fathers, that have brought upon Israel this terrible calamity. “I have not troubled Israel,” Elijah boldly asserts, “but thou, and thy father’s house, in that ye have forsaken the commandments of the Lord, and thou hast followed Baalim” – Prophets and Kings, 139,140 ISSUES: The Real Issue the Side Issues

A response to the recent attack against “certain private organizations” by the officers and the Union presidents of the North American Division.

Does The church have a cancer?

The Adventist Review of November 5, 1992, contained a sixteen- page, tract style insert titled “Issues: The Seventh- day Adventist Church and Certain Private Organizations.” It is described as an abbreviated and adapted version of a larger book with a similar title. Both the tract and the 467 page book are apparently being published for the purpose of preparing church member’s minds for the mass disfellowshipping of thousands of church members who have been protesting against unauthorized and unjustified changes in our church’s theology.

It is alleged that these “dissident” members are a cancer in the body of the church that must be cut out.

To have an informal church operating within the regular church is like having active cancer cells in a healthy body. A person diagnosed as having cancer has three options:

With this awesome introduction we are ushered into the era of what appears to be an Inquisition of no small proportions.

I have written about The Great Adventist Apostasy in an attempt to alert both church members and church leaders that totally unauthorized and unjustified changes are being made in our church’s theology, and that those changes are being effected through our educational system and our church pulpits.—( See articles by Ralph Larson in Our Firm Foundation, January through December, 1991.)

When so warned and challenged, church leaders may respond in either of two ways. They may conduct careful investigations in order to determine whether the charges are valid and take appropriate corrective action as needed. Or they may decide to simply “stonewall” the charges, close ranks, assume a defensive attitude, and try to silence the voices of those who are sounding the alarm and calling for reform.

But will this Inquisition succeed in silencing the voices of those church members who are appealing for loyalty and adherence to the principles of our historic faith, or will it have the opposite effect? Perhaps we would do well to look back at similar situations as recorded in the pages of church history.

SECTION ONE: THE REAL ISSUE Chapter I

The doctrines of our church are being changed, and this is the real issue. This is the reason for the existence of the “certain private organizations” that are being attacked; and it is the reason that these private organizations are receiving such widespread support from church members who view the changes with alarm, wondering why church leaders seem to be doing little or nothing to interfere with the changes.

The changes are wrongful for two reasons. First, they are unofficial and unauthorized, having never been voted by the General Conference in session. Second, the changes have no valid basis in Scripture but are false doctrines drawn from the Calvinistic segment of Babylon where they have been held for centuries. Our pioneers met them and rejected them, as did virtually all of our church leaders, until we started sending our young people to the educational institutions of Babylon to receive their advanced degrees.

The unauthorized doctrinal changes are being effected through our educational system and our church pulpits. Instead of presenting them to a General Conference in session as a proper procedure would have required, the proponents of these changes have simply started teaching them in our schools. As a result, there is not a Seventh- day Adventist higher educational institution in North America today which is free from the false doctrines of Calvinism.

Graduates of these institutions are now taking their places in the pulpits of our churches, in the administrative offices of our conferences and in the editorial offices of the Adventist Review and Ministry. Notable exceptions to date are the Sabbath School quarterlies of the last few years which have presented lessons in harmony with our historic faith.

Compare, for example, the following clear affirmation of the Calvinistic doctrine of original sin (defined as inherited guilt) in the Review with the equally clear rejection of that same doctrine in a Sabbath School quarterly:

If a baby dies a few hours or days after birth, it is still subject to the second death— the condemnation death— even though it has never broken any commandment.— Norman Gulley, Adventist Review, January 25, 1990, page 13. Some have taught that every human being shares the guilt for Adam’s sin, as though each of us had committed that sin ourselves. Adventists reject this unscriptural teaching.— Sabbath School Quarterly, second quarter, 1990, page 42.

Here we see Adventism and Calvinism competing with each other in two of our church’s publications. Calvinistic theology offers solutions to the horrible teaching expressed in the

Review by its doctrines of predestination and/ or infant baptism. The Review offers no solution at all but simply leaves us to the awful conclusion that all children who die in infancy must be burned to death in the fires that will consume the earth. If time and space permitted, we could fill a fair- sized book with descriptions of similar outbreaks of tension between the two theologies that are competing with each other in the Adventist Church today. In Australia, suggestions have been sent to ministers from conference offices advising them as to the best methods of sustaining the doctrines of Calvinism in opposition to the doctrines of Adventism presented in the quarterlies. In England, where they print quarterlies, they simply make changes in favor of the Calvinistic doctrines. (I have samples in my files.)

I am grateful to the writers of the Issues tract and book for presenting quotations from my writings which list five major changes in our doctrines that are now taking place in various places and to varying degrees. No doubt the Holy Spirit will use this information to alert church members to their danger, but since some readers of this paper may not have seen the Issues, I will here briefly list the five doctrines:

While I do appreciate the printing of quotations from my writings in Issues, I would have been even more grateful if it had been pointed out that I was comparing our present situation with the following Spirit of Prophecy quotations:

“Before the last developments of the work of apostasy, there will be a confusion of faith. . . . one truth after another will be corrupted.”— ST 5- 28- 94.

“God will arouse His people; if other means fail, heresies will come in among them, separating the chaff from the wheat.”— 5T 707.

These unauthorized doctrinal changes, these heresies, are the real issue. We are most emphatically not defending or propagating our personal views, as the Issues writers insist more than 20 times. To repeatedly represent to the church membership that the contest is between the personal opinions or interpretations of the “dissidents” and “the church” is reprehensible and sets up a doubly false proposition.

We are defending the theological positions that are set forth in every statement of faith that our organization has ever published (denials notwithstanding) and that are most fully and clearly stated in the 1988 publication, Seventh- day Adventists Believe. In that volume, our position on righteousness by faith is affirmed not less that 140 times, and our position on the human nature of Christ is stated like this:

He took the nature of man in its fallen state, bearing the consequences of sin, not its sinfulness.— page 49.

These are obviously not the personal views or interpretations of the “dissidents,” much less a “new standard of Adventism” as alleged in the Issues book, page 14. And how shall we understand the bald assertions that our views do not even appear in the book SDAs Believe? (See Issues book, pages 13, 49, 241,242.) I have pointed out that we are being confronted with a doubly false proposition that the issue is between our personal opinions and “the church.” Just as we have firmly denied that we are defending our personal opinions, we must with equal firmness deny that the writers and promoters of the Issues tract and book are “the church.” They are a very small group of persons within the church. We must remember that more than nine tenths of our membership live outside of the North American Division, and that the unauthorized changes in our doctrines have scarcely been heard of in most of the countries that we call mission fields. They are beginning to make their appearance there through the influence of the more recent graduates of our educational institutions, but they have as yet hardly touched the lives of the vast majority of the membership.

To a lesser degree the same principle even applies to the North American Division. The ethnic groups in North America are comparatively untouched by the doctrinal changes, as are many of our local Hispanic members, although it is moving in on the Hispanics very rapidly.

The vast majority of our world- wide membership is certainly not involved in the publication of the Issues, nor in the doctrinal controversy that it represents. In view of this reality, for those who prepared the tract and the book to refer to themselves as “the church” is wildly inaccurate and not a little presumptuous. Let us remember the definition of the church that is given to us by Ellen White:

Settle it in your mind forever, my friend and fellow believer. The real issue is unjustified and unauthorized changes in the doctrines of our church, doctrines that have been made clear to us and sealed as to their truthfulness by the Holy Spirit of God. This, of course, gives rise to a question in our minds. Why are the North American Division leaders so reluctant to discuss the real issue? Why do they prefer to emphasize side issues and pseudo issues? We will consider this question in the next chapter.