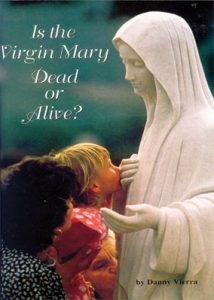 In the very beginning of earth’s history, Satan, while in the form of a serpent, told the first lie to Eve. He told her that if she disobeyed the command of God not to eat of the fruit of the Tree of the Knowledge of Good and Evil, she would “not surely die, ” even though God had expressly warned her that “in the day that thou eatest thereof thou shalt surely die .” (See Genesis 3: 4; 2: 17). Satan treacherously assured her (another monstrous lie) that upon eating the fruit “your eyes shall be opened, and ye shall be as gods , knowing good and evil.” (Gen. 3: 5). Friends, are we still believing the devil today? The Bible is quite clear that only God “hath immortality .” (I Tim. 6: 16). In fact, the Bible, on the other hand, contains a number of Scriptures that prove that mortal man receives not his immortality until the second coming of Christ— at the time of the resurrection. (I Cor. 15: 51- 55; John 5: 28, 29). Now please note these unequivocal and authoritative pronouncements on the condition of man in death from Ecclesiastes 9: 5 and 10: “For the living know that they shall die: but the dead know not anything …. Whatsoever thy hand findeth to do, do it with thy might; for there is no work, nor device, nor knowledge, nor wisdom, in the grave, whither thou goest.”

I remember the first time I ever read these Scriptures. I immediately wondered why I had always believed that a dead person could speak to me if he so chose. Was this another error of the Roman Church that had been sold to me by the priests? After all, according to the Bible, are not seances meetings in which the devil tries to send his deadly messages to unwary people through a human medium who is supposed to be able to communicate with the so- called spirits of the dead? The greatest of all seances in the Bible occurred when Saul went to the Witch of Endor , described in the Scriptures as “a woman that hath a familiar spirit”— that is, a woman who received messages from an evil angel who claimed to be the “spirit” of a particular dead person usually known to the seeker— and asked her to bring up Samuel from the dead since “the Lord answered him not , neither by dreams, nor by Urim, nor by prophets?” (I Sam. 28: 6, 7). Since when does a man of God go to the devil for advice when the Lord explicitly said: “Regard not them that have familiar spirits,… to be defiled by them: I am the Lord your God”? (Lev. 19: 31; see also Isa. 8: 19, 20). The Bible plainly states: “The dead praise not the Lord, neither any that go down into silence;” for when a man dies, “His breath goeth forth, he returneth to his earth; in that very day his thoughts perish .” (Ps. 115: 17; 146: 4).

So why do most people, both Christians and non- Christians, believe the doctrine of the immortality of the soul? I believe the problem exists because of a misinterpretation of Scripture. In Genesis 2: 7, the Bible says: “And the Lord God formed man of the dust of the ground, and breathed into his nostrils the breath of life ; and man became a living soul.” The Hebrew word for “soul” used in this text is nephesh. Besides being translated 428 times as “soul” in the Old Testament, nephesh is also translated as the following: life— 119 times; person— 29 times; and creature— 19 times. “There is nothing in the words translated ‘soul’ or in their usage in the Bible that even remotely implies a conscious entity that survives the body after death, or that attributes immortality to it. Nephesh is not part of the person; it is the person!” (Bible Dictionary by Siegfried H. Horn, Ph. D., p. 1061).

I believe the confusion stems from a misinterpretation of verses like the following: “Then shall the dust return to the earth as it was: and the spirit shall return unto God who gave it.” (Ecclesiastes 12: 7). Many people use this verse in an attempt to prove that the “soul” or “spirit” is, therefore, immortal and goes to God at the point of death. But, if you look at Job 27: 3, you will find a Scripture that will help you understand that the “spirit” is simply the breath of life by which man lives, and which is only lent him of God, and at death goes back to the Great Author of life—“ All the while my breath is in me, and the spirit of God is in my nostrils.” The Hebrew word used here for spirit is ruach, which is defined in Gesenius’ Lexicon as follows: (a) spirit or breath; (b) breath of the nostrils; (c) breath of air. When the spirit, or breath of the nostrils, goes back to God, the body, made originally from the dust of the earth, now begins its process of going back to the earth as it was and ceases to function as normally, and the nonbreathing individual no longer exists as a living, conscious, thinking being, but will rest in the grave until he is called forth by the voice of Christ “at the last day.” (John 6: 39). “Marvel not at this: for the hour is coming, in the which all that are in the graves shall hear His voice , And shall come forth; they that have done good, unto the resurrection of life ; and they that have done evil, unto the resurrection of damnation .” (John 5: 28, 29). The righteous dead will rise at the second coming of Christ and together with the living saints will meet the Lord in the air (see I Thess. 4: 15- 18), but the wicked dead will not rise until one thousand years after the resurrection of the righteous. “But the rest of the dead lived not again until the thousand years were finished.” (Rev. 20: 5). How can someone “live again” except he has first experienced having died?

By now, friends, you may be asking yourself the question: “How can the Virgin Mary be alive when the Bible so clearly tells us there is no consciousness in death?” To further establish the point, let us look at a few more Scriptures that prove that man is mortal. In the Book of Job, we read: “Man dieth, and wasteth away: yea, man giveth up the ghost [breatheth out; Strong’s Concordance], and where is he? As the waters fail from the sea, and the flood decayeth and drieth up: So man lieth down, and riseth not: till the heavens be no more [the heavens roll back at Christ’s second coming (Rev. 6: 14)], they shall not awake, nor be raised out of their sleep.” (Job 14: 10- 12). And if that weren’t clear enough, Job continues: “If a man die, shall he live again? all the days of my appointed time will I wait, till my change come . Thou shalt call, and I will answer thee.” (Job 14: 14, 15). Obviously, Job believed that he would sleep in the grave until Jesus called him out on Resurrection Morning. (See also Job 17: 13- 16). After all, it was Jesus who spoke of death as a sleep when referring to Lazarus’s state. He never once implied that Lazarus had gone to heaven, but, on the contrary, said, “Our friend Lazarus sleepeth; but I go that I may awake him out of sleep.” (John 11: 11). Then in John 11: 23, Jesus tells Martha, “Thy brother shall rise again,” and Martha responds, “I know that he shall rise again in the resurrection at the last day.” Jesus, in calling Lazarus from the tomb, said, “Lazarus, come forth (John 11: 43),” not “Lazarus, come up!” or “Lazarus, come down!” I believe that Jesus’ use of the word sleep is a very appropriate synonym when used in place of the word death (the first death), because the word implies a temporary state— a state from which every soul “shall awake, some to everlasting life, and some to shame and everlasting contempt [the second death (see Rev. 20: 12- 14)].” (Daniel 12: 2).

The great teacher, the apostle Paul, clearly understood that he, too, would sleep in the grave until the second coming of Christ: “For I am now ready to be offered, and the time of my departure [death] is at hand. I have fought a good fight, I have finished my course, I have kept the faith: Henceforth there is laid up for me a crown of righteousness, which the Lord, the righteous judge, shall give me at that day : and not to me only, but unto all them also that love His [Christ’s] appearing.” (II Tim. 4: 6- 8). Paul knew, as did Martha, that not until the resurrection of the last day, at the second coming of Christ, would he receive the reward of eternal life and be changed from mortality to immortality. Remember, it was Paul who told us in the Sacred Word that mortal man will not put on immortality until the last trumpet blast that calls forth the righteous dead at the coming of Jesus: “Behold, I show you a mystery; We shall not all sleep [for some will be living when Christ comes], but we shall all be changed, In a moment, in the twinkling of an eye, at the last trump: for the trumpet shall sound, and the dead shall be raised incorruptible [the Virgin Mary also], and we shall be changed. For this corruptible must put on incorruption, and this mortal must put on immortality [Please notice when this happens— not at death, but at the second coming of Christ].” (I Cor. 15: 51- 53). Earlier in the chapter, Paul stated: “But now is Christ risen from the dead, and become the firstfruits of them that slept. For since by man [Adam] came death, by man [Christ] came also the resurrection of the dead . For as in Adam all die , even so in Christ shall all be made alive . But every man in his own order: Christ the firstfruits; afterward they that are Christ’s at His coming .” (I Cor. 15: 20- 23).

To solidify this position, let us now look at the request of the thief on the cross, who was crucified next to Jesus as recorded in Luke, Chapter 23. The repentant thief, believing Jesus was indeed the Son of God, “said unto Jesus, Lord, remember me when Thou comest into Thy kingdom.” To this request Jesus responded, “Verily I say unto thee, Today shalt thou [thou shalt] be with me in Paradise.” (Luke 23: 42, 43). Those who believe in the doctrine of the immortality of the soul often refer to these Scriptures to prove that the spirit of the dead goes immediately to Heaven at the time of death. But let us take a closer look at Luke 23. First, we need to understand that the comma placed before the word “today” was supplied by the translators. If you place it after the word “today,” it would then read, “Verily I say unto thee today, thou shalt be with me in Paradise.” (Luke 23: 43). Second, Jesus did not ascend into Heaven as He died, for in John 20: 17, He told Mary in the early morning of His memorable resurrection: “Touch me not; for I am not yet ascended to my Father .” It should also be noted that this statement was made two days after His death on the cross. Thus, the repentant thief was given, that day [Good Friday— the day of the crucifixion], the assurance of eternal life and a place in Paradise, but he, as with the rest of the righteous dead, would not receive his reward until Jesus comes the second time. (See Rev. 22: 12).