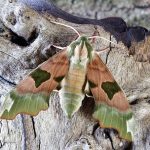 s are well known for their abilities to blend into their environment by using camouflage to match tree bark, dead leaves, and lichens. Some even have odd structures on their bodies or distort the shape of their bodies to mimic spines, twigs, and broken stubs on branches. Besides being masters of camouflage, moths use other strategies to keep from falling prey to predators.

Metalmark moths have wing markings that resemble the markings on jumping spiders which prey on them. The moths further the resemblance by behaving like the jumping spiders. They adopt a particular posture with their hind wings fanned out and brought forward, positioned perpendicular to the forewings. Since jumping spiders are very territorial, they back off from the threatening appearing moth. This converse situation, in which the prey mimics its predator, is very rare. Some moths in the tropics have spider designs on their wings to frighten away predators. One species of moth has thick hairy legs and body, and rests with all its legs pointing forward, making it look like the front end of a tarantula. Another moth has the design of a fly on each forewing to divert the pecks of birds away from its body. There are moths that mimic wasps, and some that mimic bird droppings. Many moths have large eyespots on their hind wings which are hidden while resting but when disturbed are flashed into view to startle a would-be predator like a bird into thinking it has disturbed an owl or other dangerous creature.

Like the moths, Satan is a master of deception. Not only has he deceived billions of people in the past, but his greatest deception is yet to come. “As the second appearing of our Lord Jesus Christ draws near, satanic agencies are moved from beneath. Satan will not only appear as a human being, but he will personate Jesus Christ; and the world who has rejected the truth will receive him as the Lord of lords and King of kings. …

“As the crowning act in the great drama of deception, Satan himself will personate Christ. The church has long professed to look to the Saviour’s advent as the consummation of her hopes. Now the great deceiver will make it appear that Christ has come. In different parts of the earth, Satan will manifest himself among men as a majestic being of dazzling brightness, resembling the description of the Son of God given by John in the Revelation. Revelation 1:13–15. The glory that surrounds him is unsurpassed by anything that mortal eyes have yet beheld. … This is the strong, almost overmastering delusion. …

“But the people of God will not be misled. The teachings of this false christ are not in accordance with the Scriptures.” Maranatha, 276.