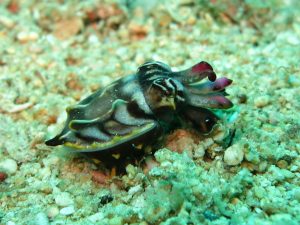 Cuttlefish are complex marine mollusks belonging to a class of animals which also includes the squids, octopuses, and nautiluses. Believed to be among the most intelligent of all the invertebrates, cuttlefish have a large brain-to-body size ratio. Cuttlefish look similar to squids but are more compact. They have a large head with a single fin running around the body behind the head. Encircling the mouth are eight short arms with suckers. Two longer prehensile tentacles, which can be withdrawn into pouches under the eyes, are used to capture their prey, which consist mainly of fish, crustaceans and other mollusks. Cuttlefish have a sharp parrot-like beak, which they use like a pair of scissors to cut open flesh. They also produce an ink for defense like octopuses. This ink was the original India Ink used in fountain pens and was used by artists as a pigment known as sepia.

Buoyancy in the water is controlled by an internal structure called a cuttlebone. This is porous and contains a gas and a liquid of which the ratio is regulated, similar to a submarine, enabling the cuttlefish to move up and down in the water column. Having eyes similar in construction to human eyes, cuttlefish eyes are among the most developed in the animal kingdom. The cuttlefish pupil is a smoothly curving W shape with two spots of concentrated sensor cells on the retina, one to look more forward, and one to look more backwards. Although they are color blind, they have an enhanced perception of contrast.

Cuttlefish are sometimes referred to as the chameleons of the sea, because they are masters of camouflage. They have amazing abilities to change color, light polarity and even the texture of their skin to camouflage themselves with their backgrounds for protection from predators and for ambushing their prey. These changes are also used to communicate to other cuttlefish. The transformation from one color or pattern to another can take less than a second and is controlled by the nervous system. The skin of the cuttlefish is covered with special cells that reflect light in many different colors. When excited, cuttlefish can change color, pattern and skin texture spectacularly, often flashing rapidly, through a whole gamut of colors, in just a few seconds. Males often engage in spectacular displays to attract a female, in which bands of color pass rapidly along the body like neon lights.

Like the cuttlefish, which changes its appearance for protection, so we need a change in our lives if we are to be saved. “Many a one who looks at himself in the divine mirror, and is convinced that his life is not what it ought to be, fails to make the needed change. He goes his way, and forgets his defects. He may profess to be a follower of Christ, but what does this avail if his character has undergone no change, if the Holy Spirit has not wrought upon his heart? The work done has been superficial. Self is retained in his life. He is not a partaker of the divine nature. He may talk of God and pray to God, but his life reveals that he is working against God.

“Let us not forget that in his conversion and sanctification, man must cooperate with God. ‘Work out your own salvation with fear and trembling,’ the Word declares; ‘for it is God which worketh in you both to will and to do of his good pleasure.’ Man can not transform himself by the exercise of his will. He possesses no power by which this change may be effected. The renewing energy must come from God. The change can be made only by the Holy Spirit. He who would be saved, high or low, rich or poor, must submit to the working of this power.” The Review and Herald, July 7, 1904.