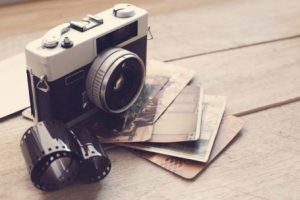 A friend related to me an experience she had while taking photographs at an event. As she took the pictures, the camera would make a whirring sound when she clicked the button to take the picture and then the flash would go off. After a while she got to thinking that she had taken a lot of pictures for one roll of film. She wondered if it was possible that she had forgotten to put film in the camera. The camera had been doing everything it was supposed to do, but had it taken any pictures? She wanted to look to see if there was film in the camera, but then she didn’t want to look, because if there wasn’t any … Finally, she did look and sure enough, there was no film in the camera.

This made me think of the scripture we find in John 15:5, last part: “[F]or without Me you can do nothing.” My friend took pictures for a long time, but without the film in the camera, she was simply going through the motions of photographing the events around her; there would be no photographs.

Let’s think about that from a spiritual perspective. The first part of John 15:5 says, “I [Jesus] am the vine, you are the branches. He who abides in Me, and I in him, bears much fruit … .” Many people consider themselves to be Christians and yet Christ does not live in them. Most of these people aren’t even aware that all the while they claim the name, they actually lack the very thing that makes them Christian—a Christlike character, Christlikeness.

“When true conversion takes place, there is a transformation of character. Christlikeness is seen.” Manuscript Releases, Vol. 18, 142

“The life of Christ on earth was a perfect expression of God’s law, and when those who claim to be children of God become Christlike in character, they will be obedient to God’s commandments. Then the Lord can trust them to be of the number who shall compose the family of heaven.” God’s Amazing Grace, 148

We may do all the right things—pay tithe, go to church, help others—but if the Holy Spirit has been unable to perform the transforming work in our hearts, writing the law of God there, making it a fit place in which Christ may dwell, then we are no better than the Pharisees, described by Jesus as being “… like whitewashed tombs which indeed appear beautiful outwardly, but inside are full of dead men’s bones and all uncleanness. … outwardly appear[ing] righteous to men, but inside … full of hypocrisy and lawlessness.” Matthew 23:27, 28

“These fearful denunciations were made upon the Jews, because, while teaching the law of God to the people, they were not doers of the word. … So it is in our day.” The Review and Herald, August 29, 1899

Let this be our prayer:

Lord help us “to make our lives what Christ designs them to be, full of the fragrance of love to God and our fellow men, full of Christ’s own divine Spirit, full of holy aspirations toward God, rich in the beauty of Christlikeness.” Our High Calling, 274