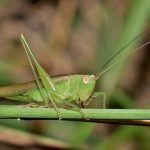 Related to crickets and grasshoppers, katydids are members of the long-horned grasshopper family. There are more than 6,400 species worldwide with the majority of species being found in the tropics. Katydids are broad-sided, leaf-like insects which live in trees and shrubs where they are well camouflaged from their numerous predators. Green is the usual color of katydids but occasionally they are brown, red, or, rarely, pink. Katydids are mostly nocturnal and arboreal (tree-dwelling), and range in size from 1 ¼ to 5 inches long. Their diet consists mainly of leaves but they will also eat flowers, bark, seeds, insect eggs, slow insects like aphids, and even carrion. Some species in the tropics are exclusively predatory, feeding on other insects, snails, and even small vertebrates such as snakes and lizards.

The name “katydid,” originated in North America where there are about 255 species. Male katydids have sound-producing organs on the hind angles of their front wings. Their songs are made by scraping a toothed file-like edge on the base of the left fore wing across a hard knife-like edge on the right fore wing. These sounds in some species were thought to resemble the words “Katy did, Katy didn’t”; hence, the name. The male katydid’s song is given at night and is used to attract females with which to mate. The females will usually answer the male’s song with chirping sounds. Katydids hear each other through structures on their legs that act as ears. Males in close proximity to each other will frequently call in unison and harmony creating a loud, resonating chorus. The speed of their calls is determined by temperature. On warm nights they sing fast, and on cool nights they sing slower. Katydids in temperate regions typically call from mid-summer through fall.

Female katydids are usually larger than males and have a long, sharp, lance-like organ at the end of the abdomen called an ovipositor. After mating, the ovipositor is used to deposit their eggs into the ground or into plant tissue. The eggs hatch in the spring, and the young resemble the adults, except for their smaller size and lack of wings. The young go through several molts before reaching full size. On their last molt they obtain their wings and become adults. Species in temperate regions live only for a year or less, while species in the tropics can live for several years.

Just as the male katydids sing together in unison and harmony, so we can sing the same way with heavenly musicians while here on earth. “When human beings sing with the spirit and the understanding, heavenly musicians take up the strain and join in the song of thanksgiving. He who has bestowed upon us all the gifts that enable us to be workers together with God, expects His servants to cultivate their voices, so that they can speak and sing in a way that all can understand. It is not loud singing that is needed, but clear intonation, correct pronunciation, and distinct utterance. Let all take time to cultivate the voice, so that God’s praise can be sung in clear, soft tones, not with harshness and shrillness that offend the ear. The ability to sing is the gift of God; let it be used to His glory.” Messages to Young People, 294. “Music forms a part of God’s worship in the courts above, and we should endeavor, in our songs of praise, to approach as nearly as possible to the harmony of the heavenly choirs. The proper training of the voice is an important feature in education, and should not be neglected.” Patriarchs and Prophets, 594. [Emphasis is original]