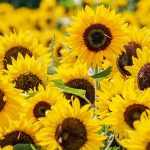 There are 67 species and 19 subspecies of sunflowers in the genus Helianthus, and all are native to North America. Sunflowers are currently commercially grown around the world for various uses. Native Americans have been using wild sunflowers for thousands of years for a variety of uses, such as flour to make bread, nut butter, cooking oil, hair treatment, wart removal, and treatments for snake bite and sun stroke. One perennial species, the Jerusalem artichoke, was grown by American Indians as a root vegetable which they called “sun roots.”

Of all the sunflower species, the most important and familiar species is the common sunflower. Believed to have been domesticated by Native Americans even before corn was, the common sunflower found its way to Europe by Spanish explorers around 1500 where it was initially used as an ornamental. Then its value as a source of cooking oil was discovered, which led to the commercialization of the species in Russia where two types of seed were then developed—one for oil and one larger variety for human consumption. Russian immigrants brought the commercialized varieties back to North America where it is now one of the leading cash crops grown today.

The common sunflower is second only to soybeans as one of the world’s leading oil seed crops. Recent new uses for the oil seeds and plants include the production of biodiesels, which burn 75 percent cleaner than petroleum diesel and have higher lubricating qualities, and rhizofiltration, where the sunflowers are used to remove toxic wastes from the environment.

Sunflowers love the sun. As they are growing, sunflowers will face their flowers in the direction of the sun, tracking it along during the day. That is why a field full of sunflowers will always be pointed the same direction. This phenomenon is known as Heliotropism. However, nearing maturity, most sunflowers stop tracking the sun and just face east to catch the morning sunrise.

“Like the sunflower, which turns its face constantly toward the sun, you must look continually toward the Source of light, that you may catch every ray possible.” Historical Sketches of the Foreign Missions of the Seventh-day Adventists, 141.

“We may keep so near to God that in every unexpected trial our thoughts may turn to God as naturally as the flower turns to the sun. The sunflower keeps its face sunward. If it is turned from the light, it will twist itself on the stem, until it lifts up its petals to the bright beams of the sun. So let everyone who has given his heart to God, turn to the Sun of Righteousness, and eagerly look up to receive the bright beams of the glory that shine in the face of Jesus. Thus we may educate the soul to press its way out of the corrupted moral atmosphere of the world, of sin and selfishness, into the atmosphere that is divine and health-giving.” The Signs of the Times, December 16, 1889.