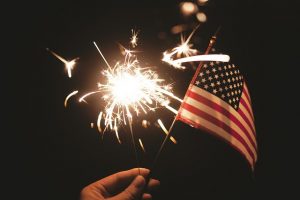 Introduction: Today’s lesson focuses on a dramatic event in the political and religious world.

1. In Lesson 15 we discovered that the Beast power of Revelation 13 represented the Papacy that reigned as a political power for 1260 years, from 538 A.D. until it received a deadly (but not permanent) wound in 1798. What did John see “coming up out of the earth” about the time this deadly wound (in verse 10) was inflicted? Rev. 13:10, 11

2. Notice that this is the only prophetic beast arising from “the earth.” What does water symbolize? Rev. 17:15 [Note: All the other prophetic powers arose from existing civilizations (“water”). But here was a power arising toward the end of the 1700s in a largely unpopulated area. What country could this be? The Further-study verses are Dan. 7:3; Rev. 13:1]

3. How did this beast evolve? Rev. 13:11 [Note: “Coming up” is from the Greek word “anabaino,” meaning to “grow or spring up as a plant” (see Matt. 13:7). Could this be the United States? Did this nation come from conquest or from growth (e.g., immigrants and land purchases)?]

4. The beast of Revelation 13:1, representing the nations of Europe, had crowns to represent kingdoms. Did the beast of verse 11 have any crowns? [Now note these clues: This nation was to (1) grow to power, (2) arise from a largely uninhabited territory, (3) toward the end of the 1700s, (4) without a king.]

6. The dragon of Revelation 12 was pagan and the Beast of Revelation 13:1-10 was Catholic. Is the Lamblike beast involved with religion too? Rev. 13:12 [Note: He would cause to “worship.” America became the seat of Protestant strength. Protestants brought separation of church and state. Thus this beast has two harmless-appearing horns, representing religious power and civil power.]

10. How will America enforce Sunday observance? Rev. 13:15-17 [Note: As disasters multiply because of the world’s wickedness, there will be a great “back-to-God” movement to reclaim His blessings. This will result in stringent Sunday laws and oppressive acts against those who keep God’s Sabbath. Rev. 12:17]

14. The book of Revelation contains many symbols. What is one possible meaning of “fire from heaven” (Rev. 13:13)? Acts 2:3, 4 [Note: In Acts 2, fire from heaven represents the Holy Spirit and symbolizes the gift of tongues (See Lesson S3). However, the apparent gift of the Holy Spirit in Revelation 13 is a counterfeit, for it leads people to worship the Beast rather than to worship God. Matt. 3:11]

15. When Jesus comes again, what will He say to those who have received the counterfeit gifts of the Holy Spirit and the mark of the Beast (“lawlessness”)? Matt. 7:21-23.

Commitment: Before Jesus comes, all the world will be forced, on pain of boycott and death, to receive the mark of the Beast by keeping Sunday holy. But those who receive this mark will receive “the wrath of God” (Rev. 14:9,10). The question, then, is, Whom will we obey? Will we say, “The Lord is my light and . . . strength . . . Though an army should encamp against me, my heart shall not fear . . . for in the time of trouble He shall hide me in His pavilion” (Ps. 27:1-5)? Will you follow God regardless of any and all human pressure to follow another master?